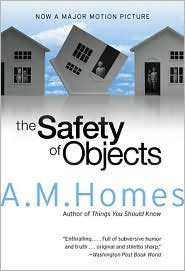 So, last week I called the Smith Family Bookstore in Eugene. I was looking for a copy of The Safety of Objects by A. M. Homes. Apparently, somehow, my copies of that title and of her Music for Torching were mis-sorted into a "sell" pile when I was packing to move to Oregon last summer.

So, both locations--downtown and near campus--told me that they didn't have it. The campus location told me that they had none of her books. I spelled her name, saying "H-O-M-E-S, not H-O-L-M-E-S."

Still, no dice. Now, Eugene's about 75 minutes from here, so I don't go there all the time. I didn't want to drive up there only to find out they didn't have the book.

So yesterday, the hubs and i decided to take a drive up there to go to the farmer's market, to buy an extremely belated mother's day gift for my mama, and to fart around. I stopped in the campus-area Smith Family Bookstore to just double-check on their lack of A. M. Homes books.

I'd like to say I was surprised, but I'm not. They probably had 20 copies of assorted books by her, including two copies of The Safety of Objects. I doubt two people sold that book to them in the last week--and I know it's impossible that they had a sudden influx of 20 copies of various Homes books. Ugh. Of course, I bought the two books that I needed--I even got Music for Torching in hardback. But I was really angry, and squinted my eyes menacingly as I gave them my money.
written & posted by Amy L. Fair around 11:43:00 AM