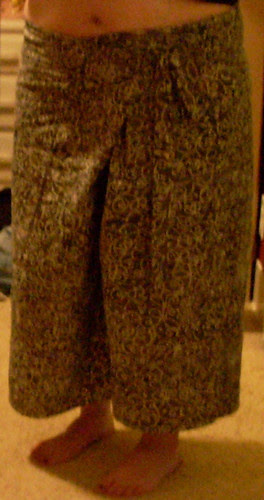 I decided today to make a pair of cropped pants. And, armed with a Jo-Ann Fabrics 50% off coupon, I went and bought some cotton batik in a brown/gray/purple color. I had an idea in mind of what I wanted to do, but there weren't any patterns for it. A few years ago, I saw a tourist in India wearing a pair of pants that also wrapped like a sarong. It took me a while to find out what they were, because they weren't Indian, and I'd never seen anything like them. I came to learn that they were Thai fishermen's pants, and proceeded to try to order a pair. Now, they're getting a little more common online, because people wear them for yoga.

Here's where things went south. I am a chunky little thing, and these pants come in one size. They don't fit largely enough for me to be able to wrap them around the right way. So, I thought I'd try to alter a pattern and fudge my own pair. What I got isn't quite the same as the Thai pants, but I really like them! Don't look at my chub . . . just at the pants. 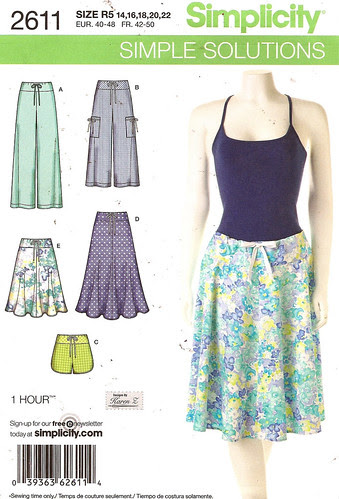 This is the pattern I used--Simplicity 2611. Instead of adding the little "drop waist" panel, I just used the FRONT and BACK pieces of the pattern. Rather than cutting the pattern in my regular size, I added three inches to each outer side of the front, and two inches to the outer side of each back panel. This added 10 inches to the circumference of the pants. I also added four inches to the top of the pattern pieces, since I was leaving off the separate panel. I cut the pattern to make the cropped version of the pants [in blue stripes, or View B, on the pattern envelope]. I sewed all four pieces together as usual, then hemmed the waist edge and the legs. I tucked over the front of the pants and pulled them to one side, marked the places where I'd need to add fasteners or ties, and then did that. The front received a tie, as did the right side seam. In the front of the pants, I added two velcro squares just to keep the pants tucked securely. I think they came out great . . . like I said, not quite the Thai pants, but cool and comfy and very easy to pack for my upcoming trip!
written & posted by Amy L. Fair around 8:30:00 PM