Alexia of Australia, or "Alexia, the Most Beautifully Tattooed Girl" 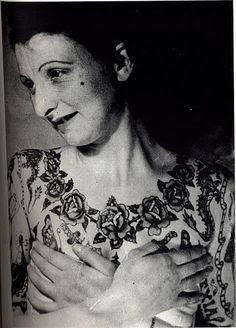 Alexia's real name was Hilder Alexandria, and she was tattooed by Bill Furness and Melbourne's R. M. Reynolds. Easily discernable from other tattooed females of her time, Alexia wore a more feminine and decorative style of tattoos than many of her American counterparts, who still wore tattoos heavy in patriotic and religious themes. Alexia was known for her unique collar, an uninterrupted chain of roses.

The photograph above is T-961 of the Bernard Kobel collection.

In the photo of Alexia's sideshow banner below, Melbourne tattooist R. M. Reynolds is at work. Of particular interest to me is the brief costume Alexia was advertised as wearing in the late 1930s and early 1940s. This suggests, perhaps, that Alexia was not just a tattooed attraction, but also part of a dancing troupe or burlesque review. While I'm only speculating about Alexia's individual story, it is true that most women who traveled as tattooed attractions were usually only tattooed on the skin that "showed"--and Alexia's torso tattoo-work is extensive. Many women with tattoo-work that extended to the breasts and stomach were employed, at least some of the time, as topless attractions. This might have been as burlesque dancers, or as blow-off acts.

This photo is available via the State Library of Victoria online [although the permalink function in their archive was not working when I wrote this]. 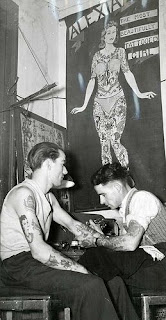