A lesser-known tattooed attraction named Agnes Riemer, who lived in Baltimore, met with a tragic end in August of 1947. During some searching in newspaper archives, I stumbled on this first article. It was my introduction to Agnes and the story of her death.

She worked for years as "Agnes Kelly, the Tattooed Woman" in and around the Baltimore area. I know from census records that she had a first husband named John Kelly, but I do not know what happened to him--nor do I know if Agnes was already tattooed during that marriage. By 1930, however, she had met Fred Sloman, a tattooed attraction, and became a boarder in his home. At some point in their living arrangement, they became involved. The eventually married, but after a few years of working as a tattooed couple, the two retired from circus life. They lived as civilians for eleven years, until Fred hanged himself without warning in 1946. 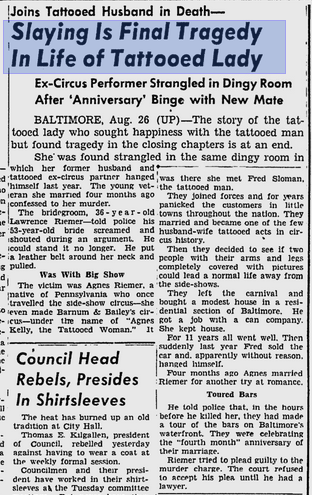 Within the same year, Agnes married another man, Lawrence Riemer, about 15 years her junior. And then, in 1947 (on the four-month anniversary of the wedding), he strangled her with a belt, in order to literally silence her. Because the husband painted himself as a victim of abuse, he received only one year in prison for her murder, even though he admitted to the crime. He did, however, set himself up for being called a "Meek Little Man" in the news. Every article paints him as a passive, weak man. I am guessing part of that is due to his defense. 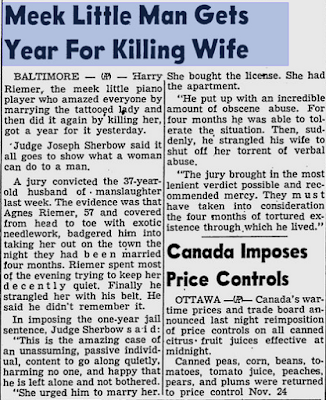 The initial article (as well as some other articles) refer to the third husband as Lawrence or Larry. The article above unfortunately names him as "Harry Riemer." There are conflicting accounts--in some, he doesn't remember strangling Agnes, and in others, he did it because she was verbally abusive. Regardless, all accounts describe Agnes as a shrew, as a wife who was relentlessly abusive to Lawrence. 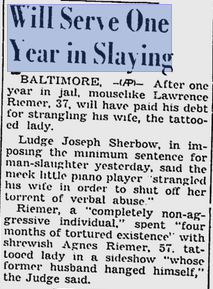 I haven't yet located any photos of Agnes or of any of her 3 husbands, and I haven't yet found consistent census records that fit their names and dates, so these newspaper articles are, right now, the only proof that she even existed.

And, in an interesting turn, I found a snippet about Agnes on a Riemer family timeline. Apparently both of Agnes's earlier husbands met "violent ends," but no more was said about that. Also, it was mentioned that Agnes was extremely violent and drank excessively. So, geneaology sites, so far, are just deepening this mystery.

I'm a working writer.
I am a poet, and I teach composition and literature in rural Oregon, where I share a small gray house with five cats.
This blog took a hiatus for several years following a mass shooting on my school's campus, but I'm currently working on making my writing projects more of a priority in my life.

I fill my limited free time with researching the histories of early 20th Century tattooed women for a nonfiction project. I am also part of a national mail art community, and I create mixed-media art journals in altered vintage books.