My 50th birthday, and remembering my second husband.

Today is my 50th birthday, and I'm spending it grading on a Saturday. Certainly the pandemic is to blame for the lack of a celebration, but I'm at the end of Week 8 in a 10-week term, and the AWP conference is next week, so I would like to be caught up, at the very least, on last week's grading before next week begins.

My second husband died on February 25th last year, so I anticipate that my birthdays moving forward will always have some sense of loss attached to them, at least for a while. I have no desire to rewrite history--things did not end well between us. But, our divorce was final only about four months before his death, and I had hoped we'd eventually salvage a friendship. I absolutely expected to know him longer. His passing does not require that I forgive him, but I am reluctant to hold onto hurt feelings and bitterness and guilt. I won't forget the numerous, valid reasons why I broke up with him, but I still mourn him. There are things that I miss, and things I'm glad are in my past. He was a big personality, and our good times were great. I loved him very much, but as I've said before, I am glad that it is a closed chapter of my life. (And, because I continue to write about him and talk about him, I know the chapter might be closed, but I'm still processing.)

My tax returns arrived--so I have paid off the small balance I was carrying on two of my credit cards, and I bought a few small pieces of furniture for the house. I used a few hundred dollars to buy a handful of books on tattoo history that have been published in the last few years--two of them over a hundred dollars. Those are my birthday gift to myself, and I feel I absolutely deserve them.

It will likely be a week or two until I'm able to sit down and write another blog post about a tattooed lady, but I'm thinking that it might be Nellie Thornton or Mildred Hull. Millie is my favorite of all, but Nellie has quite a sordid tale. They both lived very colorful lives--Nellie as a traveling circus performer with multiple husbands, and Millie as a drinker and brawler. Millie was also the first female tattooist to set up shop and work out of a barbershop in the Bowery in NYC. This is a photo of Millie. It is difficult to date this photo, as her tattoo work looks less complete here, but the fascinator she's wearing in her hair is also in another tattoo shop photo taken from another angle. In it, she looks older. 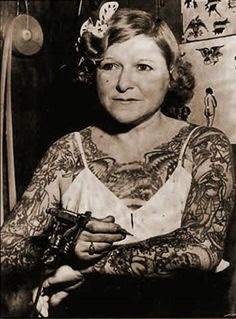 I received a rejection letter from The Rumpus this past week . . . they'd held onto my poems since last July, so I thought they had a chance at publication there. Otherwise, everything is in a holding pattern with submissions.