Two new submissions, and some thoughts after the first day of AWP.

As I was sitting in my studio watching an incredible panel on women writing over 50, I realized it's been a month since I've sent out any poetry for publication consideration. When I checked this morning, I haven't sent out work since February 9th. Close enough. It's easy to start thinking I'm just not working hard enough, not putting enough time into the process--I"m grateful I started tracking my submissions on Duotrope in addition to the excel spreadsheet I've always used. 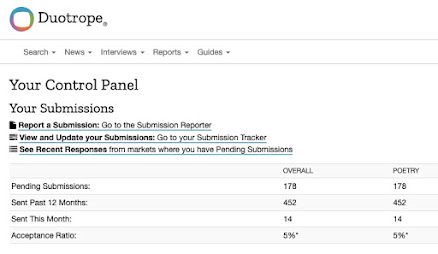 Duotrope reminds me that I've sent 452 poems out into the world in the past year, and that is pretty fantastic.

I did receive a rejection letter yesterday from Superstition Review, so submissions were already on my mind. (And who doesn't love a rejection during AWP? LOL) I pulled together a selection of five poems for Cream City Review and another four poems for Waxwing, and I sent those out this morning. Both journals have deadlines at the end of March/start of April.

I have really enjoyed the first day of AWP's conference, and the second day is just about to begin. At first, I thought there seemed like so many less panels this year than usual, but they've also spread the panels across Wednesday, Thursday, Friday, Saturday, and Sunday--when all the panels are usually concentrated on Thu-Fri-Sat. So, there might be a few less options, and the book fair experience is difficult to replicate virtually, but I like the more gradual roll-out of panels. I'm really impressed with the panels I've sat in on, and I loved the reading I attended yesterday afternoon of contemporary Muslim literature.

I know I'm going to have to spend some time this week on grading, but I really want to focus on my own writing and craft this week.