A minor-but-important correction to a published tattoo historybook . . .

Within the tattoo industry and among tattoo enthusiasts, Steve Gilbert's book, Tattoo History: A Sourcebook, has been considered one of the most thorough books on tattoo history. It is exhaustive in many areas, but it's not quite an academic-level source--which is an issue with many of the "classic" and "important" tattoo books I've been reading this past year.

Gilbert's book has not been a useful source for me, because despite the subject matter promised by the title, the history offered within this book is a male history. Women are almost entirely unrepresented in the book. 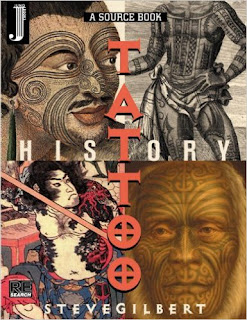 This is something that's been increasingly criticized in recent reviews of the text on amazon.com and goodreads.com. Gilbert's book could be forgiven that oversight, perhaps, had it not been published in 2001. At that time, there was already a greatly-increased interest in the role of women in early U.S. tattoo history, and there were already scholars researching and compiling that history.

However, any research into tattooed women (even today) is difficult and the resulting information is scant--I assume that due to the easy availability of men's tattoo history, Gilbert made an easy choice . . . but the book does owe the reader at least a little more insight into women's roles in tattoo history.

In addition to the lack of women's history in Gilbert's book, there is also an error in photo identification on page 130 of the text. This photo, from the Kobel collection, accompanies a section on Charlie Wagner (the tattoo artist seated in the lower right corner) and identifies the seated woman as Mildred "Millie" Hull. This is not Mildred Hull, however.

I believe the woman is "Big Liz," or Elizabeth Miller, but I'm only about 75% sure of that at this point. She was not a well-known tatttooed lady, and clear photos of her and her tattoos are few. (sidenote: I do know that Jean Furella Carroll is the woman standing at the center of the photo.)

This misidentification of Mildred Hull is a professional slight that is two-fold. First, Hull was the first independent woman tattooist in New York City's Bowery, and she is the first known female U.S. tattooist who did not find her way to the profession via a tattooist husband.

Her life was cut short by suicide, but she played an important role in NYC's tattoo history. However, she does not have a section in Gilbert's book. And, the double whammy--Gilbert (or his editors) didn't fact-check the book's photos.

If one considers the number of times that this sort of mistake has happened over the years in the small pool of women's tattoo history, and it is surprising to me that any accurate history exists at all.

The photo below is also in Gilbert's book, a few pages later . . . this actually IS a photo of Mildred Hull, Charlie Wagner, and Jean Carroll. This negative is also in the Kobel collection. From the same period of time, give or take a few years (using Carroll's appearance to judge), but Mildred and Elizabeth do not look alike.

To me, it's a blatant instance of a woman with tattoos being "The Tattooed Lady" instead of having any identity beyond that. In an industry-respected book of tattoo history, however, it's an error that's difficult to forgive. 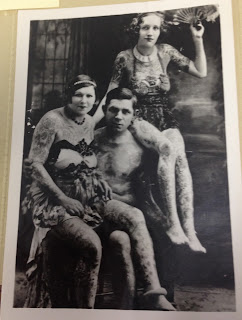