Frank and Emma Caldwell were actively working the circus and sideshow circuit in the early 20th Century. While there is not much written about them. They were a knife-throwing act that added tattoos as a way to better ensure employment--offering a "two attractions in one" for the price could sweeten the deal for traveling shows. However, the Caldwells weren't well-known enough to have much surviving history. 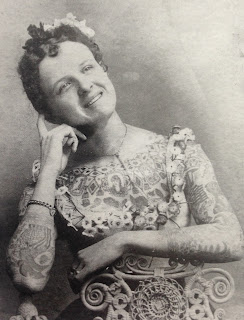 Emma Caldwell has one known portrait (the one above)--it's included in Bodies of Subversion by Margot Mifflin on page 17 as a photo of an "unidentified" tattooed attraction. Frankly, I've not seen the photo identified as Emma before, but I believe it is her, after comparing this portrait to the two cabinet cards below. The images are faint, but you can see that both Caldwells are fully tattooed. 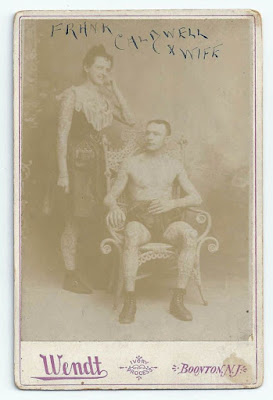 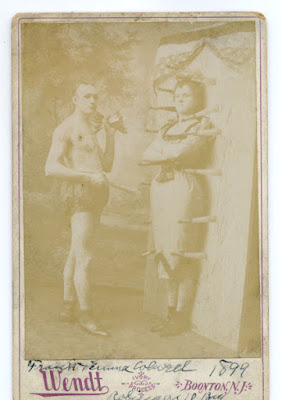 The cabinet card above, dated "1899" in pen, is part of the Ronald G. Becker Collection of Charles Eisenmann Photographs at Syracuse University. (The couple's other cabinet card, was found on Pinterest, with no link back to the original source.) The couple toured with John Robinson's 10-in-One in the summer of 1900, as members of the sideshow. They were billed as "tattooed wonders and Mexican knife throwers."

While I don't know much more about Emma Caldwell at this point, I did want to make note of her unidentified photo in the Mifflin book. She and her career are a little earlier than the focus of my research, but I still find her incredibly interesting.
written & posted by Amy L. Fair around 12:03:00 PM