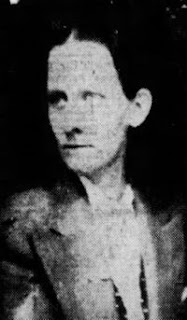 2019 UPDATE: The blog The True Crime Files published a piece on Margaret Treese in January 2019, and the blog published the photograph above, crediting the Davenport, Iowa newspaper The Morning Democrat with the image. Read the article here.

I was drawn to Margaret's story because she was originally from Steubenville, Ohio. Steubenville is less than five minutes from my hometown of Weirton, WV. Additionally, Margaret is buried in New Cumberland, WV, where she lived with her first and second husbands before leaving for the midwest; she's also buried there, as this article on findagrave.com reports. My grandparents lived in New Cumberland for many years--it's just fifteen miles from Weirton.

I was intrigued by the fact that she came from the same area along the Ohio River as I did. At the time in which Margaret would have lived in the Upper Ohio Valley, there weren't many opportunities for women. She was likely a teen bride when she married her first husband, who died in WWII, and her second husband was likely a steel worker, a coal miner, or a brickyard worker. She was destined to be a housewife and mother, probably with an alcoholic husband who worked shifts--the fate of most women of this time in this area of the country.

While newspaper accounts say that Margaret Beatrice (Martin) Treese was a circus attraction, she was working in a laundry at the time of her death. I am not convinced she ever was a tattooed attraction--she did not have a full suit of tattoo work, but just a few, scattered tattoos. I believe she either worked at the lower end of the sideshow circuit, maybe as a dancer, or she was a non-performer. She may have used the circus story to explain her tattoos, which for many years were considered to be the mark of a prostitute or woman of loose morals.

On the night of her death, she was in the company of two men. She was repeatedly run over by a car after being stabbed 10 to 15 times (reports vary). Both of the following links are detailed resources that compile information about Margaret Treese's murder.

The Tattooed Lady: The Murder of Margaret Treese, 1947

Also, this is still an open investigation--any information that would lead to a resolution to this case should be forwarded to the Davenport Police Department at 563-326-7979.
written & posted by Amy L. Fair around 1:16:00 PM